“The Father” movie explained (meaning of the plot and ending)

The spring of 2021 has been marked by the release of the British-French psychological drama “The Father,” starring Oscar-winning Anthony Hopkins.

In “The Father,” the meaning of the story reaches such dramatic depths that it leaves no one indifferent. After reading about this dramatic film, any film buff will understand why the movie shouldn’t be skipped.

Summary of “The Father”

The main character in the film is Anthony, an elderly pensioner who lives in London. The man is already well over 70, and despite the fact that he has managed to stay physically fit, his mind is increasingly failing the old man. Anthony has a daughter, Anne, who plans to move to Paris with her lover.

Leaving her father alone is not an option. The old man, who is suffering from dementia, needs care. But none of the nurses stay long because of the old man’s bad temper.

At first glance, the story seems simple enough. But as the plot develops, the movie’s meaning gets more and more complicated.

What is the movie “The father” about?

It all starts when Anthony throws another nurse out, accusing her of stealing a watch.

Upon learning of this, Anne argues with her father, threatening to send him to a retirement home. The character himself thinks he doesn’t need a nurse; he’s doing fine on his own.

But the very next day, Anthony sees a strange man in his flat. The stranger says surprising things – he is Ann’s husband named Paul, and the flat belongs to him and his wife, who’s out shopping at the moment.

The old man waits impatiently for his daughter, hoping her arrival will clarify the situation. But instead of Anne, a strange woman appears, utterly different in appearance from his daughter. Anthony is confused and irritated. What is happening frightens the man.

Anna takes her father to the doctor for a check-up and then hires a new carer, Laura. This new nurse reminds the man of his youngest daughter Lucy, whom he has always loved more than Anne. The elderly man is frustrated that his sweetheart doesn’t show up at all and doesn’t visit her father. In fact, Lucy has long been dead. And when Laura expresses sympathy for Lucy’s death in the accident, Anthony doesn’t understand what she speaks about.

In the finale, Anne is constantly quarreling with her husband because of her father. One day Anthony hears their arguments, sparked by the cancellation of a trip to Italy. Anne tries to defend her father, but Paul, unlike his wife, is unwilling to make any sacrifices for the old man. Left alone with his father-in-law, Paul accuses the elderly man of disrupting their lives and even raises his hand, slapping him in the face and causing the old man to cry.

In the next scene, Anthony wakes up and leaves the flat, and finds himself in a hospital hallway. The bloodied face of Lucy, who has been admitted to the hospital, appears before him.

Then the old man wakes up again, but now it is a bedroom in a retirement home. There’s a nurse, Catherine, next to the main character, and she is the one whom Anthony has mistaken for his own daughter in the opening scenes. From Catherine, Anthony founds out that his daughter has left for Paris.

READ:  Meaning of the movie “I Am Mother” and ending explained

The old man weeps bitterly and calls for his mother. The nurse pacifies him by promising to take him for a walk in the park.

The meaning of the movie “The Father.” 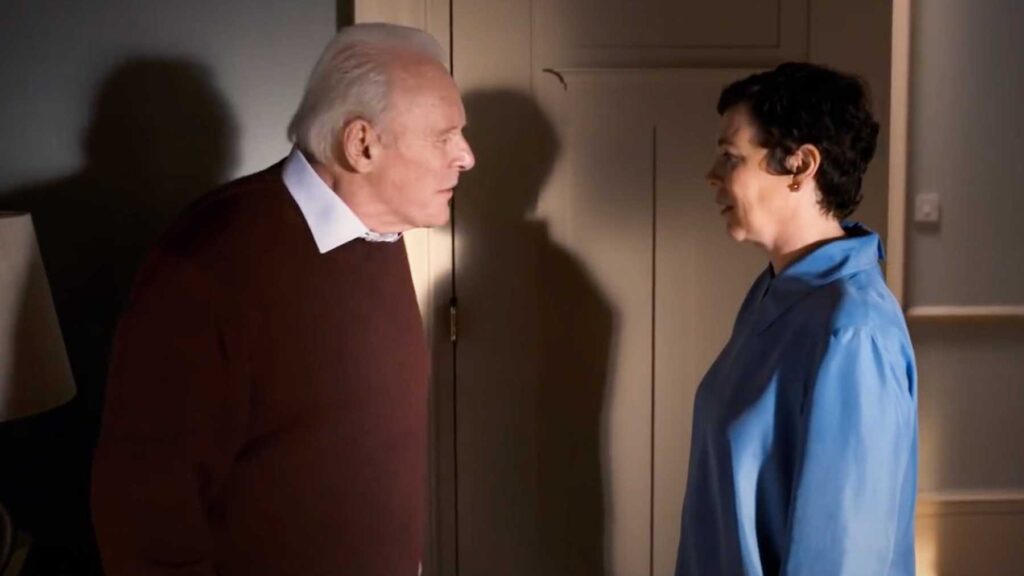 2021’s “The Father” can hardly be classified as a lightweight film. To get a better idea of the film, it is necessary to watch it thoughtfully.

The topic of senile dementia has been raised many times in many films. Still, for the first time, the gradual degradation of the personality is shown not from the point of view of an outsider – a doctor, relatives, and friends, but from the inside, through the eyes of the patient himself.

The viewer is forced to step into the character’s shoes and experience the story with him. And if in the opening scenes, everything is straightforward – the main character, his daughter, and the situation, which demands resolution, then after a few minutes, the viewer, like old Anthony, is confused and doesn’t understand what is going on.

There are many surprises that make you wonder where the reality is and where the delirium of the character’s sick imagination lies. All attempts to unravel and rationalize what is happening end in failure. That is because the point of “The Father” is not simply to show senile dementia but to convey a feeling that allows you to dive deep into the old man’s mind.

This goal was achieved thanks to the brilliant performance of Anthony Hopkins, whose eyes and facial expressions tell much more than any dialogue. The actor’s face reflects a natural fear that is transmitted to the viewer.

The combination of the Anthony Hopkins character and the ambiguous, challenging storyline gives the film “The Father” a frightening meaning. The realism of demonstrated plot, suggesting that it could happen to anyone, makes it terrifying.

READ:  Meaning of the movie “The Fare” and ending explained

Throughout the film, the viewer tries to figure out how the wanderings through Anthony’s memory maze will come to an end. But the filmmakers of “The Father” didn’t try to complicate the meaning of the finale and present a simple but true ending to the film.

Anne, who has been tormented for a long time by the unsolvable dilemma of putting her father in an old people’s home or taking care of the old man herself, sacrificing her own life, finally makes a decision.

Anthony finds himself in a retirement home in the arms of a nurse. The old man, who doesn’t understand what is happening to him, confesses at a loss that he “seems to have lost his leaves.”

Despite the fact that in “The Father,” the meaning of the plot becomes more or less clear by the finale, there’s a grievous feeling that won’t leave the viewer. The final scene with the old man crying and calling for his mother is painful and tearful.

When discussing an essential and recurring problem, the authors do not try to assess the characters’ actions. Florian Zeller, the director, succeeded in avoiding moralistic language and transformed the story into a personal experience that the viewer shares with the film’s protagonist.

In Father, the meaning of the film makes you realize how precious life is and how important it is to support and love your nearest and dearest, even if they don’t recognize you. 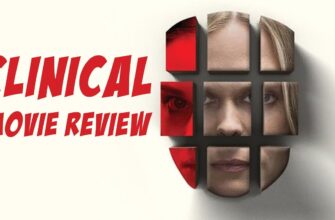 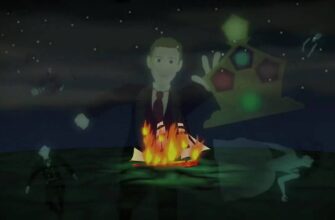