Meaning of the movie “The Fare” and ending explained

“Groundhog Day” and myths in the atmosphere of “Night on Earth”.

A taxi driver named Harris receives a strange order: he must pick up a girl at night in a very deserted area. The driver even thinks that this is some kind of joke, but the charming Penny really gets into his car. The heroes travel to their destination, but they see a thunderstorm ahead, after which something inexplicable happens. Harris will have to go after the girl again.

Viewers could already see the tandem of writer-actress Brynna Kelly and director David Hamilton in 2016’s Midnighter. Then the first pancake from the partners came out, if not lumpy, then certainly not very successful. But now they have decided not to storm genre cinema, but to tell a personal and very deep story.

The first thing you need to know about “Somewhere in Time” is that it is the most intimate film. Almost all the action takes place in a taxi, there are only three characters (with the last one appearing closer to the finale), and most of the plot is built only on dialogues.

The second thing is that such isolation really suits the film. Of course, the picture does not reach the heights of “Night on Earth” by Jim Jarmusch, also dedicated to taxis. But the authors have no such goal. They took the traditional time loop as a basis and made the main driving force not the attempts to get out themselves, but the development of relationships between the characters.

Everything that happens outside the car is shown very formally. Here, of course, played a role and a small budget. But it’s hardly worth it to seriously find fault with the simplest special effects. They may hurt the eyes of fans of science fiction and blockbusters. But they are given so little time, much less importance, that the conventions are easy to accept. It can tire only busting the game with color. As the first turn, it works well, but it would be worth stopping a little earlier.

And yet, when the characters once again talk to each other in the car, the story can be forgiven for literally everything. There is a real chemistry between Gino Anthony Pesi’s character (everyone who watched Shades of Blue with Jennifer Lopez will remember him) and Kelly’s character. Each time this communication develops. The authors seem to have peeped the ideas of dialogues from the best masters: there are comics, and life situations, and even just talking about names.

Moreover, a non-standard approach allows the story to get rid of many long-winded and clichéd tricks associated with the time loop. They usually take the characters too long to get used to the situation. In less than an hour and a half, within the framework of one car, they manage to tell about love, in which, first of all, not so much closeness itself is important as the memory of a person.

READ:  Meaning of the movie “The Jacket” and ending explained

The intervention of a new idea, which turns the plot into a global and almost philosophical story, at first seems superfluous. This somewhat spoils the chamber environment. But if you think about it, the twist does not contradict the main action at all, it just reveals it a little better, hinting that such topics are eternal. In addition, the destruction of the comfort that the characters so diligently created on the screen looks logical. The viewer will feel as insecure as the character himself. And then they just give him a little rest, adding light comedic elements.

Somewhere in Time is a great example of a film that can be made in just a few days with very little money. He proves that charismatic actors who are completely in the role, and well-thought-out dialogues will draw out even a plot familiar to many, in which, it would seem, everything has been said for a long time.

The film will definitely appeal to fans of independent auteur cinema and just lovers of unexpected touching stories. And even if the finale seems too controversial to someone, it will not cancel the atmosphere that the authors created in a simple shabby taxi.

A deserted road, night, impending bad weather, the crackle of a walkie-talkie and a taxi driver in a hurry to pick up a client. This is almost the entire entourage of the film, no need to wait for drive and juicy scenery. Black-and-white shooting is the first intrigue of the picture: how long will it last and what does this decision of the director mean?

Harry’s driver, who prefers to be called Harris, is introduced to a passenger driving to the corner of Elm and River Drive: “A penny is like a coin.” As a result of the conversation, it turns out that Penny teaches striptease dance, and Harris prefers drinking alone. The ensuing warm conversation is interrupted by a thunderstorm, the electricity in the car disappears along with the passenger. The dispatcher advises the dumbfounded Harry to reset the counter and return.

The second loop of the plot makes it clear to the audience that Harry is in a time loop: the radio plays a sequence of the same three programs as the first time. About alien experiments. About great women and their right to be angry – on the example of the kidnapped Persephone and Elena the Beautiful. About the controversial importance of orgasm in women and the indisputable need for intimacy.

Harry does not realize himself in the loop and again picks up a woman on the road, at the request of which he talks about his hobbies in his youth. A crash of thunder and a sudden crash of the car on some obstacle interrupt his question about the name of the passenger, which he still did not recognize. Penny hits her head on the cab’s partition, Harry grabs her hand in fear, and the film takes on color for the first time as he asks, “Is everything all right, Penny?”

“I didn’t introduce myself! You just remembered me. Remember me this time, Harry!” The passenger is missing again. The dispatcher’s advice to reset the counter (the moment of a kind of reboot) again sends Harris on the night road for the client and makes the film black and white.

Touching the client’s hand during the accident on the second orbit was not in vain. On the third trip, the memory of the previous two gradually returns to Harry, as does the color that serves as an indicator of her condition.

“You didn’t remember anything, but I didn’t forget anything!” It turns out that Penny got into a taxi not three, but at least a hundred times – the second layer of the plot is revealed. Harry and the viewer are convinced of the presence of a time loop, Harris enthusiastically sorts out options for how to break out of it.

Within a few turns, the friendship between Harris and Penny, who turned out to be not a dance teacher, but a gardener, grows stronger. “It’s like being trapped. Cold and cruel, work comes first,” the woman talks about her husband, and Harry about his lost love.

The passionate rapprochement between Penny and Harris is inevitable, the elements of melodrama are clear and loud in Harry’s words: “I can’t lose you. What if we’re destined to be here together?” Harry’s refusal to look for a way to break the repeating cycle of events out of fear of losing a loved one highlights the enduring value of true feelings. Only love matters, everything else is unimportant, this is the meaning of the film, which will not change on subsequent layers.

Insight into the present and memories of the past 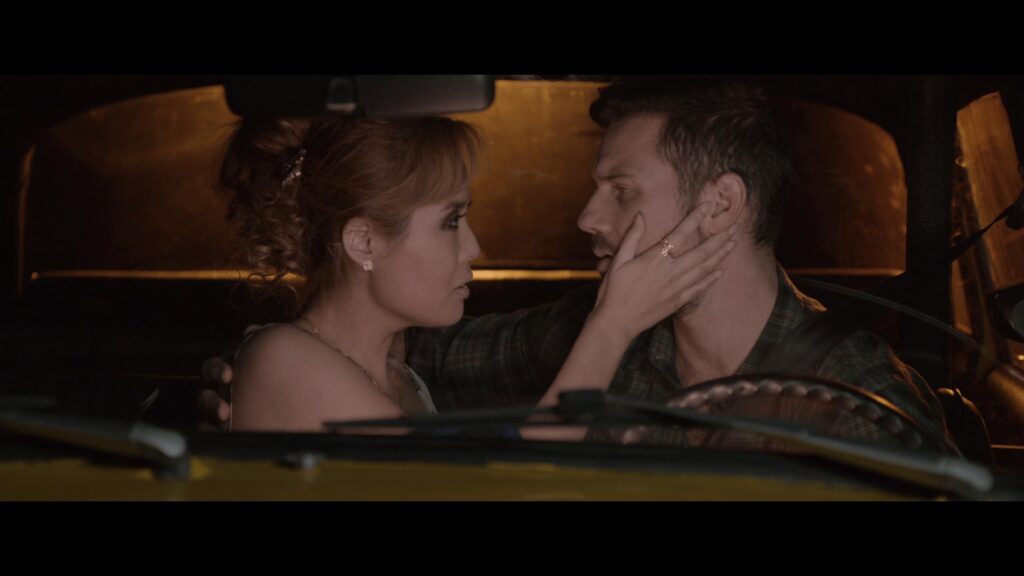 “Where did you get that scar on your head?” – Hugging Penny, Harris notices the consequences of the accident and realizes that there is no time loop. The scene is interrupted by a clap of thunder, Penny disappears with a request not to drink water. Harris pours water from the can onto the road, and events take a swift turn.

A grim, wrinkled individual gets into the car and gives the same address as Penny: the corner of Elm and River Drive. While Harris is driving him, all the memories of the lost love come back to him, in which the viewer recognizes Penny. A clear day and starry night, a blooming garden and Penny’s light dresses create an atmosphere of love and happiness, for the first time taking the viewer beyond the boundaries of the night road and bad weather. The theme of love sounds again, which can be doomed from the very beginning, but it will not become smaller from this.

The third layer unfolds rapidly, and the viewer guesses the essence, seeing how the old man pays Harris with a gold coin.

“You are the only worthwhile thing in my life”

There was more than enough gold in the taxi. Harris is the carrier of Death to the realm of the dead, who is paid by souls for delivery, and Penny is the soul collector’s wife.

Hades complains to Harry that the arranged relationship isn’t working and tells how Penny finds a new way to escape to the world of the living every year. In one of these voyages, she and Harris loved each other, after Penny’s return to the realm of the dead, Harry had an accident and was hired by Hades. Hades emphasizes that he erased the memory of the past, but Persephone herself put the water of oblivion into the car, in order to lighten Harry’s burden.

The return of Persephone to the realm of the dead is possible only with the help of a carrier, these annual trips are shown to the viewer during the film.

Harris begins to work without the water of oblivion and even finds pleasure in it, agreeing with the arguments of Hades about the nobility of their mission. Now Harry remembers every passenger.

When Penny once again returns from the world of the living, Harris convinces her that he is happy and does not need blissful unconsciousness: “Remembering you is my choice. You are the only worthwhile thing in my life. Many people go through life without finding meaning. It is not worth wasting the annual 20 minutes of a joint trip on suffering. Harry’s doctrine of rejoicing in the time that was, and those minutes that are, is a practical and useful advice to everyone.

songs
Explaining the meaning behind song “YMCA” – Village People
When you think of the song “YMCA”
0 1.2k. 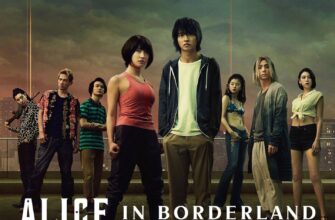 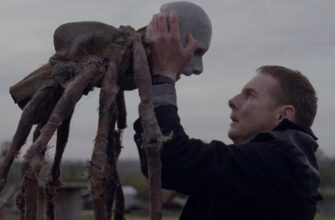 Films
“Possum” movie explained (meaning of the plot and ending)
A dream movie, an endless nightmare with repeating
0 1.3k.
You may also like